The results are in and it has been a landslide victory for the Labour Party in this year’s Student Mock Election.

When the polls closed at 2pm, the team of counters took to the Polling Station to work out the results of the Mock Election. The results revealed a +41 swing to Labour from the 2010 Mock Election, as Labour take all 17 available student constituencies, leaving the Conservatives and Liberal Democrats without any seats.

The proportion of vote share shows a 20% vote for the Conservatives, a -11 swing from 2010 with the Liberal Democrats finishing with just 6% of the votes, a -35 swing from the previous Mock Election. The turnout for the Mock Election was 52.71%

Full results can be seen below: 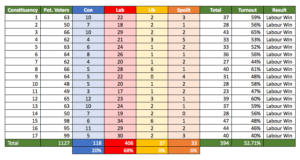