This week, students at Landau Forte College Derby have been exploring the importance of social cohesion and unity in modern-day Britain as part of an interactive workshop.

The session was led by Mike Haines, the founder of the campaign Global Acts of Unity, which aims to educate young people on issues including identity, discrimination and extremism. The aim was to get students thinking about key principles of respect, tolerance and diversity as part of their wider curriculum work.

Mike, who tours schools across the country as part of the campaign, shared his personal story with students about why he decided to start Global Acts of Unity. Since the death of his brother David at the hands of ISIS extremists in 2014 while he was supporting refugees in Syria, Mike has dedicated his time to educating young people about the importance of respect and tolerance in order to build a peaceful society.

During the visit, students discussed the benefits of multiculturalism and diversity in today’s society and explored the impact of current geopolitical, cultural and socioeconomic issues on the world around us. He also gave students advice on how to remain alert to potentially harmful influences and what they can do to ensure that they have an open and honest dialogue with those around them.

“At Landau Forte College, we seek to instil in all of our young people the importance of respect and celebrating one another’s differences. Mike’s workshop reinforced these messages and gave our students the chance to consider how they can promote positivity and inclusivity in their daily lives. We are grateful to Mike for sharing his moving story with students and providing such valuable guidance and advice as part of our wider PSHE curriculum.” 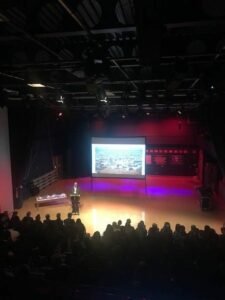